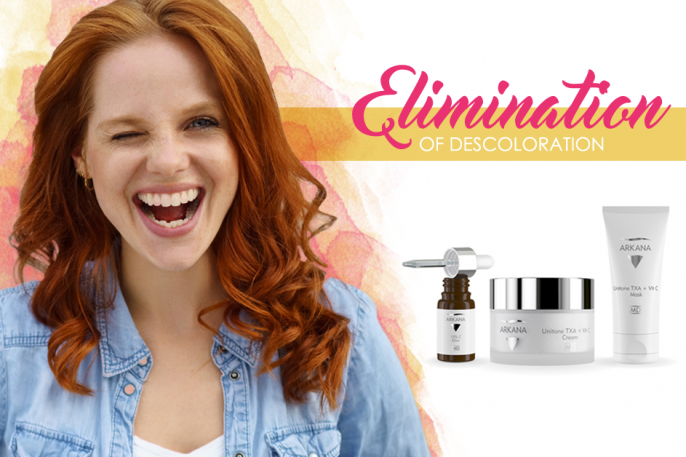 Face skin discoloration is the effect of many factors on it, not always the only culprit is the sun. Their brightening is often a big problem, but each subsequent attempt does not give satisfactory results. Skin discolorations on the face sometimes appear unexpectedly, at first they may be small, almost imperceptible, but as time passes they become darker and it is difficult to hide them under the make-up layer. So how to fight them and restore a good tone to the skin?

Skin discoloration after tanning
Most often we blame the sun, which has a significant share in the formation of discoloration. We notice changes in the form of darker patches primarily in the spring and summer, and sometimes skin discolorations on the legs may also appear. UV rays adversely affect the condition of our skin, despite the fact that we owe a beautiful tan in the summer. The spots after tanning are the result of melanocyte dysfunction. These are the cells that are responsible for the production of dark pigment – melanin. Overproduction of melanin is the defense of the skin against solar radiation.

Facial discolorations can only be caused by UV radiation, but are very often the result of a photo-allergic or phytotoxic reaction. They are caused by the contact of some substances in the blood with sunlight. These include hormonal medicines, antidiabetic drugs, some antibiotics, but also herbs, ie St. John’s wort, chamomile, calendula and field horsetail.

Skin discoloration after acne
Acne is an unpleasant ailment affecting people in adolescence. The problem disappears with age or after many years of treatment, it can also accompany your whole life. Even if we get rid of it, in many cases there are footprints that remind us of the hardships in skin care at an early age – it is the discoloration of the skin after acne. It is the effect of previous inflammation that caused disorders in melanogenesis.

Skin discoloration in pregnancy – is it a cause for concern?
Increased estrogen levels during pregnancy favors more intensive work of melanocytes. According to some scientists, the problem is also a consequence of folic acid deficiency. Skin discoloration during pregnancy usually appears in the second trimester, taking on a yellowish and dark brown color. In most cases, we only see them on the face, but it happens that changes affect other places, such as legs, cleavage or hands. After delivery, the discoloration may disappear when the hormone is regulated. However, the problem is not always resolved.

How to choose a cream for skin discoloration?
Facial skin discolorations require special care. The basis is a cream for skin discoloration, which must be distinguished by a composition aimed at lightening the changes, but also restoring normal functions of melanocytes. It can not run out of vitamin C and B3, which effectively eliminate redness. It must be included in the component that brightens and evens out the color, it is tranexamic acid with an additional anti-inflammatory effect. Both he and vitamin C are present in a cream that brightens and evens the skin tone of Unitone TXA + Vit. C. We recommend the Unitone TXA + Vit mask from the same cosmetics line. C with the addition of licorice extract, brightening and preventing new discoloration. You can find out more about what skin discoloration cream you can find here.

Unitone + Vit C Therapy is not just home care cosmetics. The rope offers a professional treatment in a beauty salon, which is perfect for summer sunbathing.

Remember – combining daily care with a professional treatment with tranexamic acid is merciless for discoloration.