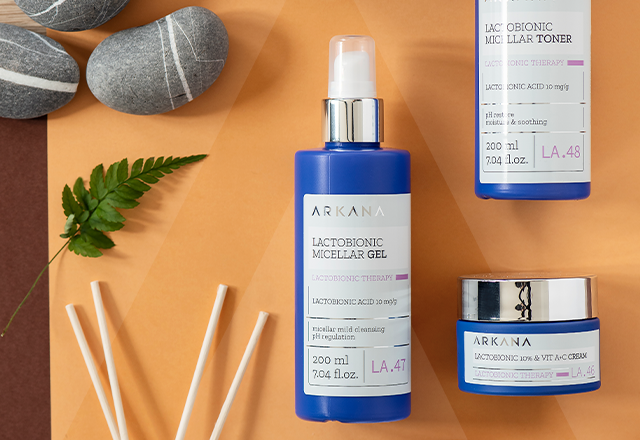 Safe, year-round and strongly regenerating and soothing – this is what lactobionic acid is. It is worth reaching for it when the skin needs strong hydration, especially after winter. If you want to learn more about how lactobionic acid works, how to use it and what effects you can get with professional ARKANA therapies, read our guide to the end.

Lactobionic acid – how does it work?
Lactobionic acid is PHA acid, a new generation hydroxy acid, the so-called bionic acid. It consists of a polyhydroxy acid molecule – gluconic acid and a sugar molecule – galactose. Its power, determined by the pKa value, is the same as that of glycolic acid (3.8). Like other hydroxy acids, it regulates the exfoliation process and stimulates fibroblasts to produce collagen and elastin fibers and glycosaminoglycans in the dermis. However, compared to traditional acids, it has a less irritating effect and thanks to the galactose molecule – soothes irritations and has anti-inflammatory properties.

Delicacy and strong regeneration of the skin
Lactobionic acid has strong regenerating properties, and it is an extremely delicate acid that soothes irritation, redness, inflammation, and also strengthens the hydrolipid barrier. Due to its structure, this acid is a strong humectant – it can bind and retain large amounts of water, just like hyaluronic acid. Perfect as a component of preparations for skin care with inflammations of various etiologies. For this reason, lactobionic acid has been used in treatments intended for people with atopic dermatitis, rosacea and ordinary acne, seborrheic dermatitis and contact eczema. It is indicated for use after dermal esthetic treatments (chemical peels, laser therapy, needle mesotherapy). Thanks to its properties that accelerate skin healing, it soothes inflammatory changes. In addition, it supports the skin during treatment with retinoids and steroids, thus reducing the side effects of drugs. Its absorption through the skin is not associated with additional irritation or subjective sensations such as itching or redness.

Lactobionic acid – effects
Lactobionic acid inhibits matrix metalloproteinases, thereby stopping the degradation of collagen and elastin, and prevents the formation of telangiectasia. It seals already dilated capillaries. It has a positive effect on microcirculation, which nourishes and firms the skin. In addition, it acts as a strong antioxidant, thanks to which it delays chronological aging and photoaging. Clinical studies have confirmed the anti-aging effect of lactobionic acid after just 3 months of use. There has been an improvement in the brightness of the skin, reduction of fine wrinkles and improvement in firmness and elasticity. Due to its antioxidant properties, this acid reduces tissue damage caused by oxygen radicals and accelerates the renewal of dermis cells.

Safe exfoliation for all year
Products with lactobionic acid can be used all year round. Due to their structure, bionic acids do not show photosensitization – therefore they can be used both in the care of skin damaged by excessive sun exposure (to moisturize and regenerate) and extremely sensitive (vascular, with erythema), which must be treated extremely gently. Lactobionic acid used as an ingredient in chemical peeling is extremely gentle, but it performs the peeling function perfectly – it exfoliates the stratum corneum, but in a way that is invisible to the eye. If you want to learn more about peels used in cosmetology, we recommend our article “All year-round treatments with acids- MUST DO in beauty salon.

Professional Lactobionic Sensi Peel can be successfully used in treatments aimed at the most demanding, sensitive skin that does not tolerate other chemical peels. The thick, gel consistency allows for easy application, even around the eyes. In its composition, this product has as much as 15% lactobionic acid, and its minimum working time on the skin is 10 minutes. It does not require neutralization and exfoliation is not visible. We recommend it as an independent exfoliation, but also as an additional complementary treatment in therapy with other acids (after 7-10 days). It is perfect because it does not irritate, removes flaking, flaking epidermis and accelerates regeneration, it can be successfully combined with other treatments.

Lactobionic Micellar Gel and Lactobionic Micellar Toner play an important role in the line. Gel and tonic with lactobionic acid clean the skin of make-up and other impurities, lowering the pH of the skin and preparing it for the adoption of new products from the series. Due to proper preparation, the applied acids are able to penetrate deeper to fulfill its function in the reconstruction of the skin and blood vessels.

The creams have a low pH and high concentrations of lactobionic acid, which allows the skin to work at the right level. It is worth focusing on comprehensive care, because the products from the Lactobionic Therapy series, used one after another as the next steps of the treatment, help to regenerate the skin not only at the level of the epidermis, but also in its deeper layers.